This post is a follow-up of the talk given at Big Data AW meetup in Stockholm and focused on different use cases and design approaches for building scalable data processing platforms with SMACK(Spark, Mesos, Akka, Cassandra, Kafka) stack. While stack is really concise and consists of only several components it is possible to implement different system designs which list not only purely batch or stream processing, but more complex Lambda and Kappa architectures as well. So let’s start with a really short overview to be on the same page and continue with designs and examples coming from production projects experience. 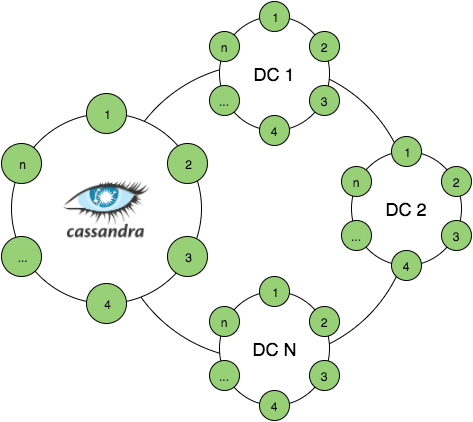 Cassandra is well-known for its high availability and high-throughput characteristics and is able to handle enormous write loads and survive cluster nodes failures. In terms of the CAP theorem, Cassandra provides tunable consistency/availability for operations.

What is more interesting when it comes to data processing is that Cassandra is linearly scalable(increased loads could be addressed by just adding more nodes to a cluster) and it provides cross-datacenter replication(XDCR) capabilities. Actually, XDCR provides not only replication but a set of really interesting use cases to be used for:

But all these features come for their own price and with Cassandra, this price is its data model, which could be thought of just as a nested sorted map that is distributed across cluster nodes by partition key, and entries are sorted/grouped by clustering columns. Here’s a small example:

To get specific data in some range the full key must be specified and no range clauses are allowed except for the last column in the list. This constraint is introduced to limit multiple scans for different ranges which will produce random access to disks and lower down the performance. This means that the data model should be carefully designed against the read queries to limit the number of reads/scans which leads to lesser flexibility when it comes to supporting new queries. Here are C* data modeling 101 slides that provide several examples of how CQL tables are represented internally.

But what if one has some tables that need to be joined somehow with other tables? Let’s consider the next case: calculate total views per campaign for a given month for all campaigns.

With the given model, the only way to achieve this goal is to read all campaigns, read all events, sum the proper ones (with matched campaign id) and assign them to the campaign. And it looks really challenging to implement such a sort of application because the amount of data stored in Cassandra could be really huge and won’t fit the memory. So the processing of such sort of data should be done in a distributed manner and Spark perfectly fits this use case.

The main abstraction Spark operates with is RDD(Resilient Distributed Dataset, a distributed collection of elements) and the workflow consists of four main phases:

Here’s how one can solve the above problem with Spark and Cassandra:

Interaction with Cassandra is performed via spark-cassandra-connector which makes it really easy and straightforward. There’s one more interesting option to work with NoSQL stores - SparkSQL, which translates SQL statements into a series of RDD operations.

With several lines of code, it’s possible to implement naive Lamba design which of course could be much more sophisticated, but this example shows just how easy this can be achieved.

Spark-Cassandra connector is data locality aware and reads the data from the closest node in a cluster thus minimizing the amount of data transferred around the network. To fully facilitate Spark-C* connector data locality awareness, Spark workers should be collocated with Cassandra nodes. 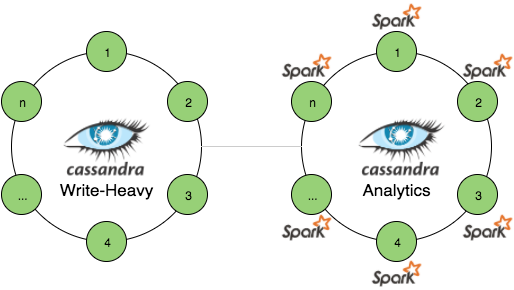 Alongside Spark collocation with Cassandra, it makes sense to separate your operational (or write-heavy) cluster from one for analytics:

There are three main options available for cluster resource managers: 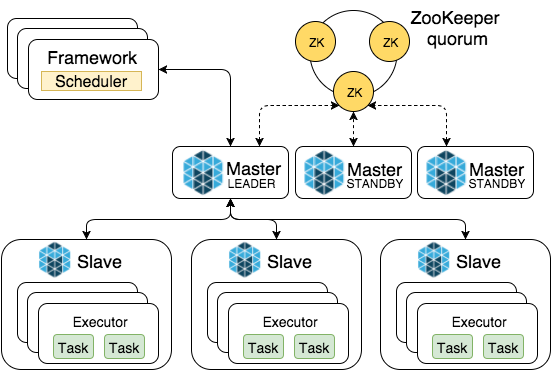 Mesos cluster consists of Master nodes that are responsible for resource offers and scheduling and Slave nodes which do the actual heavy lifting of tasks execution. In HA mode with multiple Masters ZooKeeper is used for leader election and service discovery. Applications executed on Mesos are called Frameworks and utilize API to handle resource offers and submit tasks to Mesos. Generally, the process of task execution consists of these steps:

Bringing Spark, Mesos, and Cassandra together

As said before Spark workers should be collocated with Cassandra nodes to enforce data locality awareness thus lowering the amount of network traffic and Cassandra cluster load. Here’s one of the possible deployment scenarios on how to achieve this with Mesos. 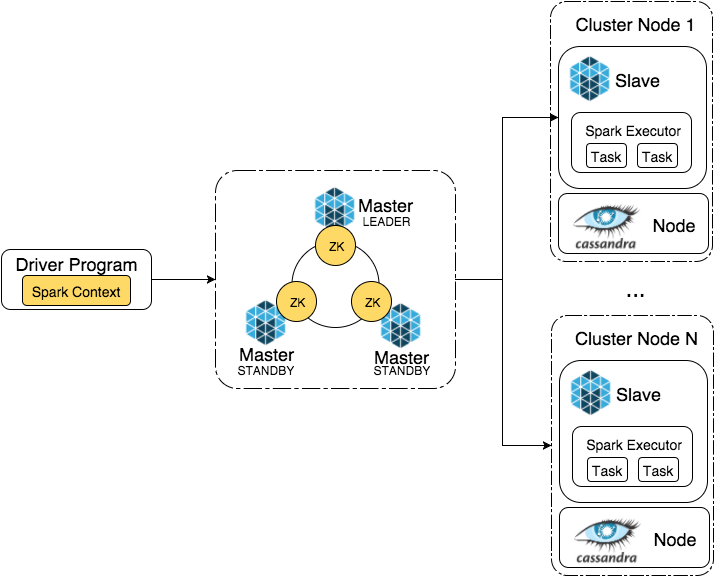 There exist options to run Dockerized Spark so that there’s no need to distribute binaries across every single cluster node.

Every data processing system sooner or later faces the necessity of running two types of jobs: scheduled/periodic jobs like periodic batch aggregations and long-running ones which are the case for stream processing. The main requirement for both of these types is fault tolerance - jobs must continue running even in case of cluster nodes failures. Mesos ecosystem comes with two great frameworks supporting each of these types of jobs.

Marathon is a framework for fault-tolerant execution of long-running tasks supporting HA mode with ZooKeeper, able to run Docker, and having a nice REST API. Here’s an example of a simple job configuration running spark-submit as a shell command: 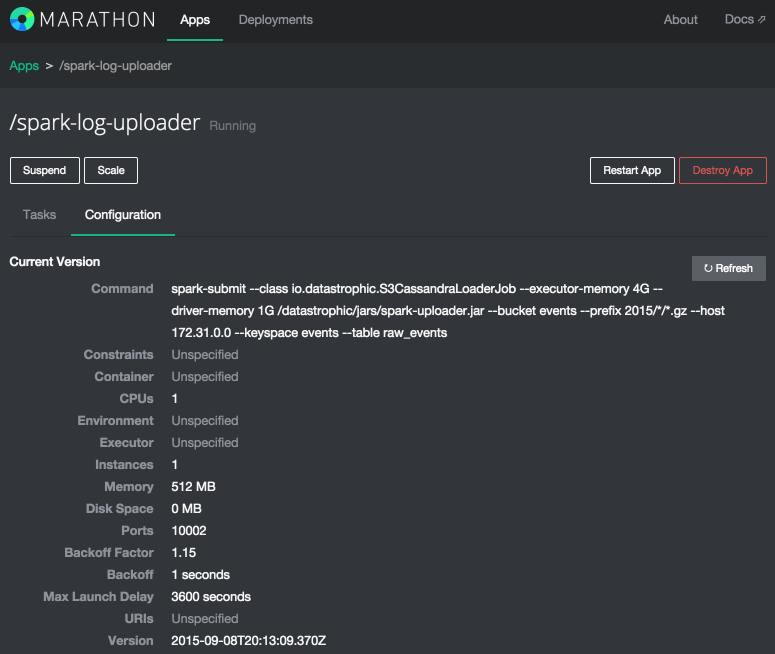 Chronos has the same characteristics as Marathon but is designed for running scheduled jobs and in general, it is distributed HA cron supporting graphs of jobs. Here’s an example of an S3 compaction job configuration which is implemented as a simple bash script: 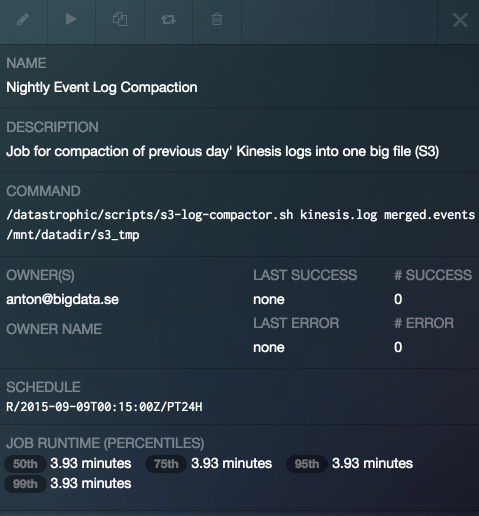 There are plenty of frameworks already available or under active development which targeted to integrate widely used systems with Mesos resource management capabilities. Just to name some of them:

So far so good: the storage layer is designed, resource management is set up and jobs are configured. The only thing which is not there yet is the data to process.

Assuming that incoming data will arrive at high rates the endpoints which will receive it should meet next requirements:

Backpressure is not a must, but it would be nice to have this as an option to handle load spikes.

Akka perfectly fits the requirements and basically, it was designed to provide this feature set. So what’s is Akka:

Here’s a simplified example of three actors which handle JSON HttpRequest, parse it into domain model case class and save it to Cassandra:

It looks like only several lines of code are needed to make everything work, but while writing raw data (events) to Cassandra with Akka is easy there is a number of gotchas:

Kafka as a buffer for incoming data

For keeping incoming data with some retention and its further pre-aggregation/processing some sort of distributed commit log could be used. In this case, consumers will read data in batches, process it, and store it into Cassandra in form of pre-aggregates. Here’s an example of publishing JSON data coming over HTTP to Kafka with akka-http:

While Akka is still could be used for consuming stream data from Kafka, having Spark in your ecosystem brings Spark Streaming as an option to solve the problem:

Designing for Failure: Backups and Patching

Usually, this is the most boring part of any system but it’s really important when there exists any possibility that the data which came into the system could be invalid or when all the analytics data center crushes.

So why not store the data in Kafka/Kinesis? For the moment of writing Kinesis has only one day of retention and without backups, in case of a failure, all processing results could be lost. While Kafka supports much larger retention periods, the cost of hardware ownership should be considered because for example, S3 storage is way cheaper than multiple instances running Kafka as well as S3 SLA are really good.

Apart from having backups the restoring/patching strategies should be designed upfront and tested so that any problems with data could be quickly fixed. Programmer’s mistake in aggregation job or duplicate data could break the accuracy of the computation results so fixing the error shouldn’t be a big problem. One thing to make all these operations easier is to enforce idempotency in the data model so that multiple repetitions of the same operations produce the same results(e.g. an SQL update is an idempotent operation while the counter increment is not).

Here is an example of a Spark job which reads S3 backup and loads it into Cassandra:

The high-level design of data platform built with SMACK 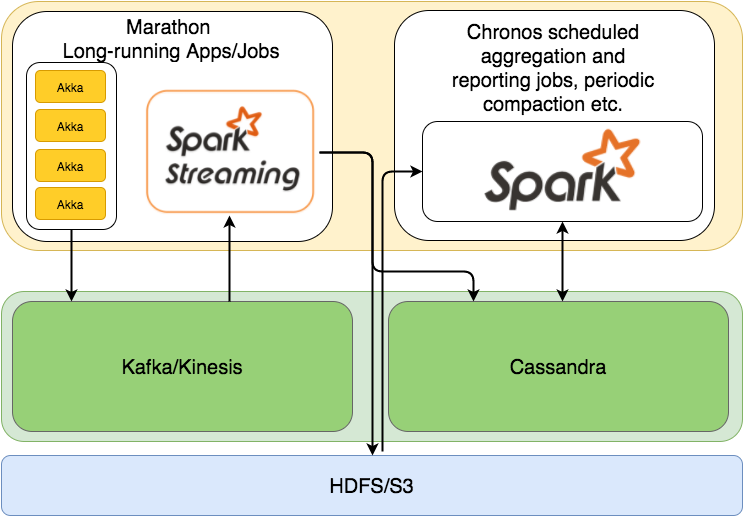 So what does the SMACK stack provide: