This post came out of the post-conference presentation to my team, so the slides are also available here and contain all the links to related materials and presentations so you can discover more on your own.

So here are the main themes/areas discussed at Scala Days:

The talk is available at Parleys, here’re some highlights:

Java code compilation is bound to JVM, and Scala compiler adds Scala-specific signatures to classifiers that result in a larger size of classifiers and lower effectiveness.

Another problem that Scala faces is its dependency on JDK/JVM and its need to adapt to version changes (e.g. migrating from Java 7 to Java 8). Besides that JVM is not only one target platform, so that’s the place where TASTY comes into play. The main goal is in removing this dependency on specific platform versions. Plus some internal optimizations of code representation aimed to make code faster.

#####DOTC The long-term plan for the Scala platform is in switching to a new Scala-specific DOTC compiler (based on Dependent Object Types calculus) and switch to work in conjunction with TASTY. For the moment of writing the compiler was close to completion, so for more details about DOTC here’s the link to the original paper Dependent Object Types: Towards a foundation for Scala’s type system. 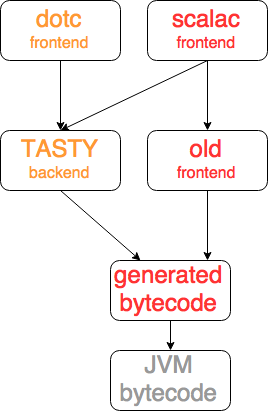 Life beyond the illusion of the present

A philosophical talk by Jonas Bonér focused on consistency in distributed systems. One of the main ideas was that actually data shouldn’t be updated or deleted, it can only be created and read(CR). And there’s still a number of problems in achieving consistency in distributed systems, but there’s a number of approaches to manage it though, like vector clocks, consistency as logical monotonicity (CALM), and commutative replicated data types (CRDTs). Here goes a brief description of them:

a block of code is logically monotonic if it satisfies a simple property: adding things to the input can only increase the output. By contrast, non-monotonic code may need to “retract” a previous output if more is added to its input.

is a type of specially designed data structure used to achieve strong eventual consistency and monotonicity (absence of rollbacks). There are two alternative routes to ensuring strong eventual consistency: operation-based CRDTs and state-based CRDTs. The two alternatives are equivalent, as one can emulate the other, but operation-based CRDTs require additional guarantees from the communication middleware

What about the talk itself, it was mainly describing these systems and providing some code samples. Reference application (killrweather) using all these technologies is available on github as well. Helena Edelson demonstrated “her nerdy chart” with different architecture design strategies and technologies suitable for them:

Another interesting part was that DataStax is developing a Cassandra Streaming driver which uses Cassandra as a source and is supposed to be used with Spark.

How to unsuck your Options in Futures

Link to the video. Very often you need to unwrap the option value contained in the Future or any other container. This involves writing cumbersome code for extracting the actual value and this cumbersome code grows linearly. But Scalaz library provides a set of monads which are called “monad transformers” and allow you to unwrap one-level depth values to perform operations with them which results in a single type class/container of expected type in the end.

Let’s imagine you have different containers and want to perform some operation on their values. For this case, you need to “cast” (wrap) the given objects to the closest one and then apply the monad transformer.

So why is all this needed? For-comprehensions are a really awesome feature actually which allows writing really concise and readable code. For-comprehensions basically use two operations that should be implemented in used classes: map and flatMap.

So here we go closer to the Monad. Apart from Category Theory, monad can be thought of as a TypeClass with methods: map, flatMap and create (bind and unit). And to satisfy the for-comprehension contract with our Future-of-Option monad transformer we need to implement map and flatMap.

Scalaz provides a number of useful monad transformers out of the box. But if you need anything special, you can generalize the given code a bit and use a Monad trait from Scalaz to abstract a bit more.

Understanding the backend of Big Data

The talk was generally about four main topics:

Really impressive talk by Noel Welsh providing several really simple guidelines to make Scala code better structured and more idiomatic which is crucial when someone just started using Scala or just needs to train the team moving to it. So basically six core concepts form the learning curve of Scala:

Topics covered in the talk were ADT, Structural recursion, and Sequencing computation

So main conclusions of the talk are that in fact, Scala is simple, 3 described patterns cover 90% of code (and 4 cover 99%) and that program design in Scala is systematic.

It was a really monadic talk about Scalaz usage in real projects showing how to properly abstract the logic with monads and wiring functions together.

The talk was focused on distributed domain-driven design and its implementation with Akka.

A couple of words on the distributed domain-driven design. Some examples of Non-Distributed Domain

With Akka and DDDD

So the main idea here is to use Actors to represent domain entities (e.g. bank accounts) and store the state mutations as a commit log with periodical snapshots which is achieved with an akka-persistence module. Cassandra was used for storing the journal so in total the system looks really interesting. CRUD and CQRS were compared and tested with the Gatling stress tool with results available in Boldradius blog post.

Some Other Cool Talks

More awesome slides and videos from Scala Days Amsterdam are available at Parleys!