Apache Mesos provides a unique approach to cluster resource management called two-level scheduling: instead of storing information about available cluster resources in a centralized manner it operates with a notion of resource offers which slave nodes advertise to running frameworks via Mesos master, thus keeping the whole system architecture concise and scalable. Master’s allocation module is responsible for making the decisions about which application should receive the next resource offer and it relies on Dominant Resource Fairness(DRF) algorithm for making these decisions. This post presents a set of experiments for different use cases using simple Mesos framework implementation to observe and analyze DRF behavior.

Mesos official documentation provides a great overview of the architecture, so let’s briefly recap the framework and resource offers part of it.

The Scheduler is a single instance/process which negotiates with the Master and is responsible for handling resource offers, task submissions, tasks status updates, framework messages, and exceptional situations such as slave losses, disconnections, and various errors. Sometimes high availability is a requirement for schedulers, so some sort of leader election or specific logic is needed to avoid conflicts in task submissions.

The Executor is a process executed on Slave nodes that receive tasks from Scheduler and run them. Executor lifecycle is bound to Scheduler so when Scheduler finished its job it also shutdowns the executors (actually Mesos master performs this routine when framework terminates). If the Executor is a JVM process it usually has a thread pool for executing received tasks.

Tasks are serialized in protobuf and contain all the information about resources needed, executor to run on, some binary serialized payload (e.g. Spark tasks are serialized and transferred as a payload in Mesos tasks). Here’s an example of how Task is created:

Sources are available at the accompanying gihub repo. 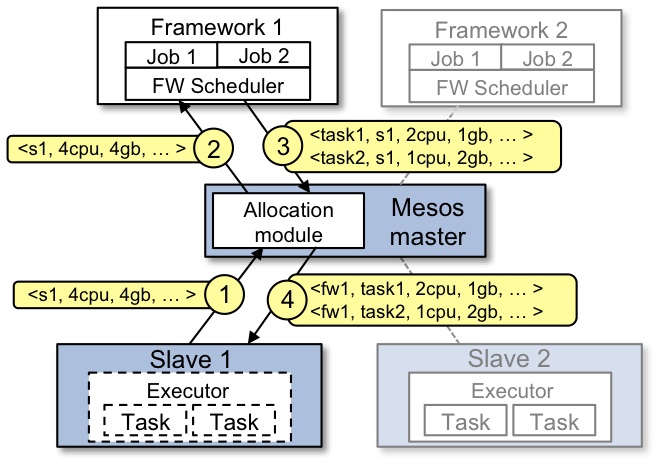 The main problem that DRF solves is sharing of the resources of multiple types (but not only CPU) which hasn’t been addressed before and caused insufficient resource distribution among applications with heterogeneous resource demands. To address this problem the notions of dominant share and dominant resource have been introduced.

Dominant resource - a resource of a specific type (cpu, memory, disk, ports) which is most demanded by the given framework among other resources it needs. This resource is identified as a share of the total cluster resources of the same type.

In the end, there is only 1cpu and 1gb RAM available, so that cluster CPU is utilized for 90% and RAM for 95% which is pretty good saturation.

Hopefully, the description was not very complicated, because the algorithm itself is very simple and sound. Please refer to the original paper “Dominant Resource Fairness: Fair Allocation of Multiple Resource Types” for more details.

There’s not always that perfect cluster saturation in real life so the next part of the post will cover different use cases and how DRF addresses them. We’re about to run several instances of simple Mesos Framework with different resource demands (configured at launch time) in parallel to observe DRF behavior and identify potential bottlenecks.

For the purpose of observation of DRF behavior a simple Mesos framework is going to be used. The scheduler will submit one task per resource offer round, and the executor will emulate the processing by putting the task thread on sleep for a random amount of time. The main requirement of the framework is configurable task resource demands to properly set up different conditions for parallel execution with heterogeneous resource demands.

An excerpt from the Executor task handling method:

The config case class is created with scopt (scala options parser) and the framework invocation code looks as follows:

A small virtual cluster will be used for the experiment with a total capacity of 6 CPUs and 6.6 GB RAM. We’re going to use small-sized dummy tasks (which simply sleep to emulate processing) so the total capacity is not big deal here. A dockerized environment is also available on github.

Redistribution of resources between frameworks with same demands

Let’s first look at how Mesos will redistribute resources when new frameworks with similar resource demands are added and removed from the cluster. We’re going to use < 0.5 CPU, 512 RAM > (or < 8% CPU, 7.5% RAM >) as task resource demands and 20000 + Random.nextInt(20000) millis as task duration to make tasks running for 20-40 seconds each because when tasks are too small the cluster will not be fully loaded (default resource offers round frequency is 5 seconds).

First Framework A will be launched as the only application running on the cluster. After a while we’ll see this picture in Mesos UI:

Let’s now launch competing Framework B. In most cases the behavior is as expected - equal sharing of resources:

But for short periods of time one can observe this picture (disregarding the framework):

This is a result of the transitional situation when both frameworks have been having equal dominant share (50/50) and when two of Framework A’s tasks have finished close to each other in time (resulting in 4 running tasks). After that the first offer goes to A, it accepts and launches one task (now it’s 5 running tasks). The next offer goes to B and it accepts it (having no tasks finished up to the moment, the total amount of tasks is 7). The next offer will go to Framework A. It’s actually not an extraordinary situation though because these distortions are normal taking into account specifics of the framework implementations and how they work with resource offers.

Now Framework C is launched in the cluster:

For the reasons described above sometimes a different picture can be observed:

Redistribution of resources between frameworks with heterogeneous resource demands

Let’s see how it works:

Looks awesome, but here’s a trick in resource demands: frameworks together completely saturate the cluster and their dominant resources are not in the conflict. Two tasks of Framework A use ~60% of cluster CPU while two tasks of Framework B use ~67% of memory. But let’s increase Framework B’s memory demands up to 36% (2500MB), so to run two tasks it will need >72% of the max share and more resources in the offer. Most of the time we’ll be observing this picture:

The picture could change when both tasks of Framework A are finished in between resource offer rounds and all freed resources are offered to Framework B which will launch two of its tasks. After that there are enough resources for launching only one task of Framework A :

The conclusion is that running multiple small tasks is better than launching large ones in terms of time spent waiting for enough resources to be freed by other frameworks.

After a number of simulations with a different number of frameworks with different dominant resources the observations described above still hold. Corner cases still appear but within different time frames, and resource allocations converge to a fair distribution of resources.

One important thing to note is that one resource offer represents the amount of resources available on one slave node. This means that if someone wants to execute a task that needs N cpus and M memory there should exist a physical node in the cluster which has this capacity.

Mesos enforces incremental task execution to run the whole job (fine-grained mode), but if some sort of gang scheduling is needed then the framework could implement a coarse-grained approach (like Spark does) to run its executors with maximum available resources and schedule the job by means of the framework. Another important thing to mention is that frameworks don’t have information about the total amount of cluster resources so it’s hardly possible to allocate all the resources at once.

Rephrasing a sharing incentive point: users are offered to share the whole cluster resources instead of exclusively owning their own partition. While in both cases the user has guaranteed minimum allocation of 1/n of cluster resources (given that there’re n users) in case of partition allocation user will not be able to allocate more tasks than 1/n while with DRF it’s possible to allocate more tasks using resources released by other frameworks.

Where to go from here